“Our findings suggest that individuals who quit smoking and switched to e-cigarettes or other tobacco products actually increased their risk of a relapse back to smoking over the next year by 8.5 percentage points compared to those who quit using all tobacco products,” John P. Pierce, distinguished professor at the University of California San Diego and first-named author of the study, said in a news release.

“Quitting is the most important thing a smoker can do to improve their health, but the evidence indicates that switching to e-cigarettes made it less likely, not more likely, to stay off of cigarettes,” Pierce said.

The study, published in the medical journal JAMA Network Open, used data from the nationally representative Population Assessment of Tobacco and Health longitudinal study. It identified 13,604 smokers who were surveyed from 2013 to 2015 to explore changes in use of 12 tobacco products. 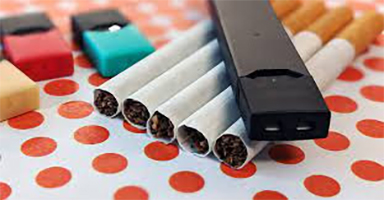 At the first annual follow-up, 9.4% of the established smokers had quit. Among the quitters, 62.9% remained tobacco-free and 37.1% switched to another tobacco product. Among the switchers, 22.8% used electronic cigarettes, and 17.6% of them used e-cigarettes daily.

At the second annual follow-up, the authors compared the former smokers who were tobacco-free to those who had switched to e-cigarettes or other tobacco products. They found that the switchers were more likely to relapse than former smokers who had quit all tobacco, by 8.5 percentage points.

This study was released soon after the U.S. Food and Drug Administration authorized three electronic cigarette products, saying they met the federal standard of protecting public health because study participants who used the products were exposed to fewer harmful chemicals, and the aerosols in those products were significantly less toxic than combusted products.

However, the FDA emphasized in a news release that the products were not “FDA approved” because “All tobacco products are harmful and addictive, and those who do not use tobacco products should not start.”

Audrey Darville, a certified tobacco treatment specialist and an associate nursing professor at the University of Kentucky, cautioned that it’s important to remember that the FDA’s marketing approval was related to harm reduction, and not as a smoking cessation device.

“I think that’s a big indicator that, you know, even the tobacco industry is not finding that the evidence is there, or is clear that these are actually effective for,” she said. “So, is switching going to be better for health? Yes, probably. But is it going to keep people off of combustibles? Again, what this study shows is that it is not.”

Darville also said electronic cigarettes are not entirely harmless because of the impact they can have on the cardiovascular system and noted their long-term impact is still not known.

She said more research is needed to find out what works to help people quit vaping, noting that e-cigarettes are a different delivery system for nicotine than combustibles, often at higher concentrations.

Also, vapers use the products in a “more continuous” manner, “especially when they’re highly addicted; they’ll be vaping during the night, they wake up and take a hit off of a vape.”

All of this adds up to strong addictions because of the increased exposure to nicotine, she said.

“All tobacco products are harmful and addictive,” Darville said. “That JAMA study acknowledges the strength and the power of that addiction, and that switching to e-cigarettes, as nice as it would be to have a magic bullet, is not going to be the panacea that the tobacco-cessation community is hoping for.”

According to the Centers for Disease Control and Prevention, in 2018 14.9% of U.S. adults had ever used an electronic cigarette, and 3.2% were current users. A 2018 Kentucky Health Issues Poll found that 24% of Kentucky adults had ever used an e-cigarette and 8% of that group used them regularly. In Kentucky, 23.4% of adults are smokers, more than any state but West Virginia.